You know what to do, so why are you reading this? Get down to the questions and answers!

1. What is something that bothers you if it's not done perfectly?
Life. What can I say? I have high expectations.

2. Do you think a 6th sense exists? Explain.
It must. How else can I know the very instant my children get into trouble?

3. Do you say your goodbyes slowly, quickly, or not at all?
That depends on how eager I am to leave.

4. On a scale of 1-10, with ten being hot hot hot, what level of spice do you like in your food? What's your favorite 'spicy' dish?
I'm probably a six or a seven. I like a little spice in my food, but I don't like hot just for hot's sake. And as always, my favorite dish is the one someone else makes!

5. What is one of your all time favorite commercial jingles?
It's not actually a jingle, but I like this one.

6. Plane, train, boat or auto...your preferred method of travel?
I don't know, but whatever I travel in I want it to be first class!

7. What is something you take for granted?
That the Hodgepodge will always be there. : )

I have a lot of apps to organize my time. I think I need an app for organizing my apps.

Email ThisBlogThis!Share to TwitterShare to FacebookShare to Pinterest
Labels: Hodgepodge

... but who's counting?! I just know it's lots of fun. Click on the link and see everyone's answers to this week's questions--after commenting on mine, of course!

1. If you could work for any one government agency which would you choose and why?
Okay, I read through the entire list of governmental agencies from the link that Joyce provided. And I've come to the conclusion that I want to work for the agency that manages all the agencies. Because there seems to be a lot of redundancy, inefficiency and overlapping in all these various departments, agencies and commissions. I think I could whittle that list down to size.

Getting people to actually complete their list of duties? That's a whole other issue.

2. How difficult is it for you to forgive someone who refuses to apologize?
It's not hard at all! I keep telling them I forgive them, and that eventually gets under their skin so much that they apologize just to get me off their back. : )

3. What is your favorite meatless supper?
I'm sorry! You lost me at "meatless".

4. Wednesday August 10th is National Lazy Day...will you be celebrating? If so, tell us how so we can be lazy too.
I can't celebrate. I was lazy once, earlier this year, and I'm still paying for it.

5. As a child did you have any special back to school traditions and if so, what were they? If you're a parent did you carry on those traditions with your own children?
Early in my grade school career, I panicked through those beginning school days, and eventually ended up trying to run away from school (usually during recess) and head home. The teacher always caught me, and I didn't know the way home anyhow. I didn't pass this tradition on to my children because we homeschool. There's nowhere else to run. : )

6. Write a summer tongue twister.
Sweating, shade-less on the sandy seashore,
I bask in the balmy breeze off the brine.

7. Would you be interested in observing a surgery or do you turn away when the nurse brings out the needle?
That depends on the patient. There are some people that I might enjoy seeing going under the knife.

Indiana read my blog yesterday (something he rarely does) and then went out and bought a bigger trap for our yard invaders. He has declared all out war, especially since the clever rodents spread garbage all over our front lawn before taking their pilfered meal and eating it in the driveway under our van. The boys caught a possum last night, making the count so far Boyds: 2; Clever Scavengers: 1,000.

Email ThisBlogThis!Share to TwitterShare to FacebookShare to Pinterest
Labels: Hodgepodge

For the past several months, I have been watching a growing battle with a great deal of amusement and some exasperation. And since I enjoy making fun of my life full of guys, I thought I would share this situation with you.

We live in a typical Florida subdivision. By this I mean that we live with rows of houses built way to close because that makes them less vulnerable in hurricanes. And we belong to an HOA, which means we pay money to have total strangers tell us that our garbage cans were left out too long or we have weeds in our cracks. For that kind if information, you'd think they'd at least take us to dinner first, but whatever.

Although we have quite a lot of neighbors around, we do have conservation land behind our house, meaning there's a small area of woods there. And occasionally, we have critters that come out of those woods to pay us a visit.  Critters like this raccoon: 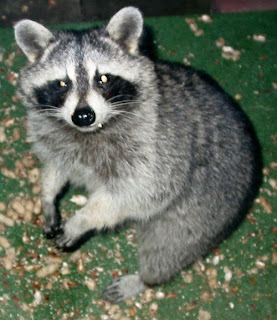 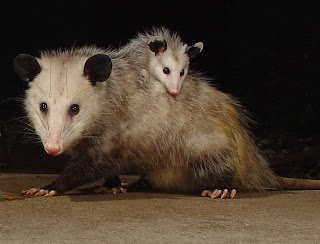 Please note, these pictures are mere representations of the creatures that invaded our yard. The actual creatures were not cooperative about being photographed.

When the boys actually remembered to put our garbage cans in back of the house after trash pick-up, these friendly little visitors would dig through the cans, eat whatever they thought was worthy, and then fling the rest of the garbage all over our backyard. 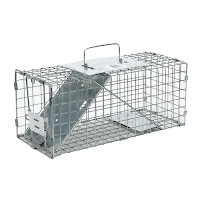 At first my mighty hunters wanted to open an upstairs window and wait for the marauders. But since that let the air conditioning out and the heat, humidity and bugs in, I squashed that idea. So then my main hunter, Indiana Jones himself, bought a trap to use in catching these little garbage thieves.

This is not the actual trap, because it also refused to cooperate with photographs. But it's a pretty close imitation.

So all of my guys got involved with "baiting" the trap--meaning putting a little good-tasting(?) garbage inside it--and trying to catch the beasts that were invading our garbage.

The first morning they all tore down the stairs and went to see if they had caught anything. The bait was gone, and the trap was twisted and stretched. Apparently they caught something that proceeded to rip the trap apart in its effort to get away. Were we trying to catch a raccoon or a miniature Mighty Joe Young?

Nothing daunted, Indiana repaired the trap and reinforced it to withstand the incredible strength of our creature. To the boys' disappointment, they discovered the next morning that the creature had used the trap as a stepping stool, climbing up on top of it in order to reach into our garbage can.

This was one smart critter.

They moved the trap further away from the garbage can and continued their pursuit. They ended up baiting the trap multiple times a day, and nearly tearing their hair out as they tried to discover how the creature was getting the bait but not springing the trap.

I maintained that they were clearly teaching the critter where to come for his food, and that by now, all his little buddies were hearing about the saps that lived in the corner house as well. In short, I was pretty sure we were probably attracting more creatures than ever before. Not to mention the neighborhood dogs.

No one listened to my nay-saying, and their efforts to catch this clever little bandit redoubled. Finally one night this past week, they sat up in the family room until almost 1:30 in the morning, alternately watching a movie and listening for sounds in the backyard. When they heard the trap, all of them raced to the window like a distorted version of 'Twas the Night Before Christmas. (I opted for the sensible choice of going to bed over waiting for our friendly neighborhood rodent to make an appearance.)

My hunters were greeted by an amazing sight:  a possum had indeed gone for the bait and sprung the trap. But there was also a raccoon out there. Apparently, the raccoon had opened the trap door and let the possum back out. When my guys appeared, the two crafty burglars took off for the woods.

When I heard about these two escapees from the Wonderful World of Disney, I hinted that perhaps the jig was up and they should quit feeding the wild animals. But with true grace, Indiana acknowledged the intelligence of his foe and observed that this battle was just now getting interesting.

So how did these two scavengers figure out the trap? Obviously, they found the discarded instruction manual in our garbage cans, of course!

1. Share a favorite song lyric.
I would never say I can't think of one because I wouldn't want to get an "F", : ) but although I've appreciated many a well-turned musical phrase, I can't currently locate a favorite in the deep recesses of my mind. However, I am a big fan of words, and I do have a favorite phrase to share with you, even though it didn't come from a song. In a book I was reading, a laid-back country boy announced that he was "imminently cognizant of the grammatical parameters." You'd be amazed how often I manage to work that phrase into a conversation!

2. When was the last time someone yelled at you?
I haven't been yelled at, but I have been insulted. At work this week when I offered to take a message, the caller said he'd rather leave the message with a real person, but if none was available he guessed he'd leave it with me. I have promised my co-workers that, in the future, I will try to act more like a real person.

3. Money, fame, happiness...are they mutually exclusive?
Only if you see money and fame as a means of achieving happiness.

4. What is your favorite dish to prepare for family and friends that doesn't require turning on the stove, oven or an outdoor grill?
Ice, of course! (It's my specialty.)

5. The first week of August is National Simplify Your Life Week. What is one thing you could do this week to simplify your life? Hire a maid and a cook. Will you do it? Probably not.

6. On a scale of 1-10 (with 10 being 100% and 1 being not at all) how tuned in are you to your country's national political scene?
Let's just say I'm more in tune with the political scene than the politicians apparently are with the will of the people. A condition I hope can be rectified during the next election cycle.

7. What are your final parting words to the month of July?
I don't usually speak to months since they never speak to me.

I do, however, occasionally speak to our pets, uncooperative inanimate objects (the copier), and people who obviously flunked drivers' education and yet happen to be operating a vehicle directly in front of me.