This will be the last Hodgepodge of the year. You know you've been wanting to join every time you see one. You always have answers for all the questions. Now's the perfect time to set aside all that holiday preparation and jump in. What have you got to lose?

1. How will you spend 'the night before Christmas'?
Not sure, but I know I won't be wearing a kerchief or a cap. And if we hear a clatter on the roof, Santa just might get taken out with a .357. We don't do well with unexpected night visitors.

3.  Fudge-are you a fan?  Your favorite flavor?
I made some last night, and I know it was good 'cause I licked the spoon. (And maybe scrapped a little leftover chocolate out of the pot. Shhh!)

5. What's your favorite type of holiday gathering?
Any type of gathering. Presents. Lots of fattening foods we never eat any other time of year. Friends. Family. What's not to love?

7. Share a favorite scripture, quote, saying, or song lyric relating to peace.
It is madness for sheep to talk peace with a wolf -Thomas Fuller

8.  Insert your own random thought here.
Merry Christmas to all, and to all a good night. The words are someone else's, but the sentiment is mine.

The Age of Innocence 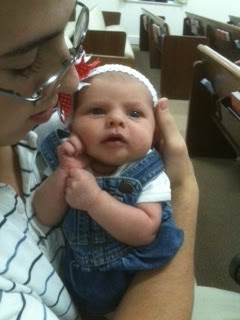 Every once in a while we get a laugh from some of the innocent comments of our boys, and today I thought I'd share a couple of them with you.

As you can well imagine, things have been hopping around here. With having a new Boyd in the family, we're all getting an education and a half. And since that new Boyd is a girl, the boys are finding out more than they ever thought they didn't know.

On the day that Kylee was induced, my phone conversations were filled with discussions about how far along Kylee was and how much she was dilated. I didn't realize the boys were paying so much attention to what I said until we got to the hospital to see the new baby.

As everyone in our family ooohed and aaaahed over Stella and took turns holding her, one of the boys turned to his oldest brother and asked the brand new dad rather innocently, "So how much did Kylee's eyes dilate?"

Matt blinked a moment and then said, "What?"

Our innocent hesitated. I could tell that he was a little proud of himself for working this all out in his head. He'd had his eyes dilated before, so he put two and two together and got nowhere near four. However, the snicker or two he heard made him unsure. Finally he repeated his question, "How much did Kylee's eyes dilate?"

Last night on the way to church, we passed a bar that advertises their live music. I noticed another of our boys showing extreme interest in the sign and asked him what he was looking at.

I could tell from his tone that he wasn't sure why the Rescue Rangers would be at a bar, so I had to break the truth to him.

"They're not talking about the squirrels."

"Oh." He looked relieved that some favorite cartoon characters weren't hanging out at a bar, but I could see a question lingering too. I let it linger. Some things they're just not ready for yet.

And neither am I.

I haven't done one of these since before Thanksgiving! And it's not because I've been busy doing the items mentioned in Question #1! It's more like Question #5. And #2 which has to do with #5 which makes me wonder if I'm really doing Question #2 for the right reasons. At least, I would contemplate that, probably while enjoying Question #4 and especially while enjoying Question #1, except that I can't do any of that because of Question #5. And don't even get me started on Question #7!
While trying to sort all that out, why don't you read about my issues, and then click here to go see Joyce's blog and the answers of everyone else in the world. (Everyone who is someone anyway because that's who does the weekly Hodgepodge!)

1. So, when did you last take a walk in the woods? A stroll along the beach? A drive going nowhere in particular in the car?
I don't walk in the woods because of the bear. I last strolled on the beach on our anniversary in June. (Don't awww. We weren't alone because his parents were visiting.) Also, we live less than an hour from the beach, and I haven't strolled there in six months. That's just wrong.

As far as the drive goes, we went nowhere in particular on Saturday, but we were trying to go somewhere in particular. We just missed a turn (there were six of us talking. Ahem!), and we went way out of our way.


2. Are you sending Christmas cards this year? About how many do you send? Photo card or something more traditional? How do you display the cards you receive?
I did most of my cards last night, only stopping when I ran out of cards. I hate doing cards, but I love receiving them and unfortunately, most people eventually quit sending them if you don't send some too.

That's so not right!


3. What's a word you've heard too much of in the past week?
JUN Spartan. It's the name of a particular action figure that my boys want for Christmas. Back in October we had a guest speaker at church that was preaching on prayer. He talked about asking God until you get an answer, and he used the illustration of a child repeatedly asking for something until the parents get it for him. Apparently my boys were actually listening, at least to the illustration part.

4. December 13th is National Cocoa Day-are you a fan? Plain or flavored? Marshmallows or no marshmallows?
Cocoa is flavored. It's cocoa. And it's been too warm here to really enjoy any.


5. What is something you do to help alleviate the hectic pace of the Christmas season?
First, I make a list of everything I have to do for the season. Then, I put things in order by when they need to be done chronologically. Then, I cross things off as I accomplish them.

Then my time gets away from me and I start panicking whenever I look at my list. Then I quit looking at my list because I start hyperventilating.

Then I reevaluate my list and start crossing off things that really didn't need to be done anyway.

Then I start crossing off things that didn't get done on time and now it doesn't matter.

Then I usually lose the list and operate in total crisis mode, running from one deadline to the next.

It's a complicated system, but it works for me.


6. Besides jewelry, what's a favorite sparkly-glittery item in your home or closet?
I like my tree because it glitters. And no, I don't have a picture of it. That's not on my to-do list.

I used to get aggravated with my tree because all the ornaments and ribbons would fall off whenever a boy or a pet was near it, which was often. This year I fastened my ribbons to the tree with binder clips. It works for me.


7. Share a favorite line or two from any Christmas carol.
It's not a favorite line by any means, but when we hear someone sing the phrase Do you hear what I hear, the boys always follow it up by singing Please be more specific.

8. Insert your own random thought here.
My answers are longer this week probably because I'm putting off some of those items on my to-do list.

At any rate, I'm back and, as usual, I have a really really good reason for being gone. I know I always say that, but wait until you read this one!

I've taken on yet another new job in my life. I know, I know. Like I have time for that. I already work in an office (my only paying gig). Plus, I spend one day a week at the church office, never accomplishing everything I have on my to-do list. I also homeschool my boys which is an interesting ... challenge and helps me develop skills (mostly coping skills, but whatever).

And then of course, there's the writing. Not blog writing, which clearly is not taking enough of my time, but writing for publication. Just in the last month I've had the possibility of a new opportunity open up, so I'm trying to develop a project for that, although the project at this point is getting about as much attention as my blogging.

With all that going on plus the normal demands on a housewife, mother and pastor's wife, you'd think I wouldn't have the time or inclination to take on anything else, but this is something I truly couldn't resist. Seriously. Even if I wanted to, which I don't. 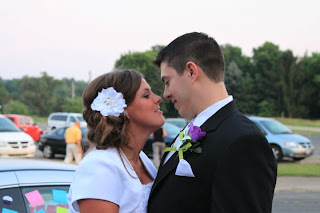 Ya'll may remember how I took on the role of mother-in-law about a year and a half ago. Here's a picture from the celebration of me becoming an mil. Oh, and it was my son's wedding day as well.

I've done admirably in the in-law role, if I do say so myself. If you don't believe me, ask Kylee, who has adjusted even better to marrying into the Boyd Bunch. It takes a special person to be able to deal with our clan, but Kylee seems to thrive on it. (Or she hides it well, but I'm thinking positively here.) 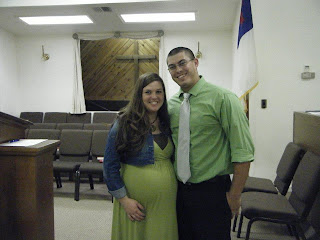 Earlier this year I blogged about the fact that this couple was going to make me face the G word. I've had nine months to face the fact that I'm taking on this older, supporting role and I found myself looking forward to it, even though it took four or five months for me to actually bring myself to say the G word. It's clear from this picture that I didn't have much time left. This was taken the night before Kylee was to be induced. She was really sick of everyone telling her she looked like she was going to pop. And we were all taking bets on wondering how big Baby Stella would be. After all, Kylee's birth weight was 9 pounds and 13 ounces, and Matt weight 10-1/2 pounds! (And 32 hours of labor, son, don't forget!) 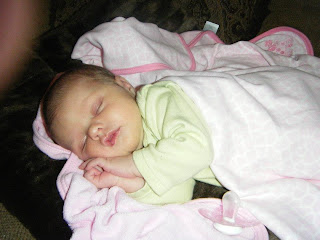 Stella Elise was born at 12:58 in the morning on Tuesday, November 27th. She weighed a tiny 6 pounds and 12 ounces and was 20-1/2 inches long. And she's adorable, if I do say so myself. All of us, including my motley crew of boys, can't get enough of her. I doubt this little girl will ever put her feet on the ground until she enters kindergarten because we're always lined up to hold her. 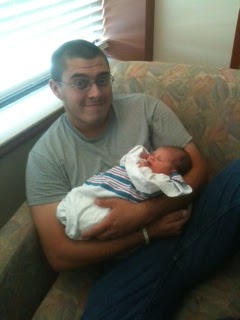 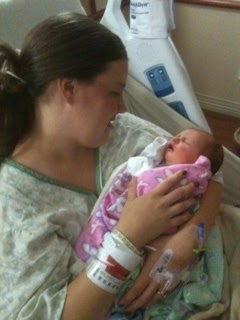 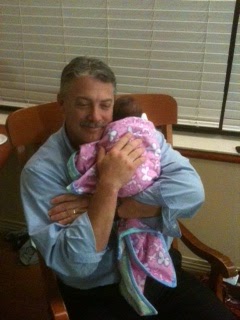 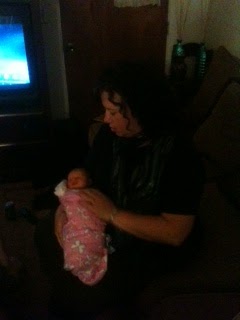 Grandpa and Grammy are real pleased too. 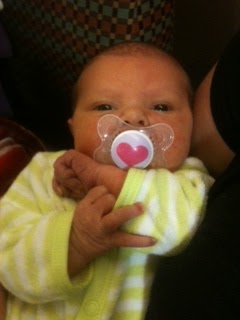 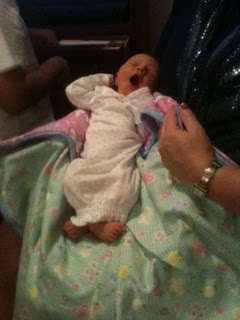 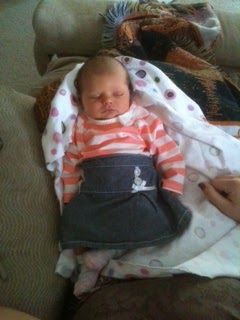 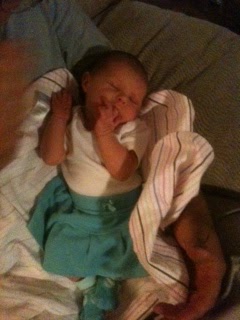 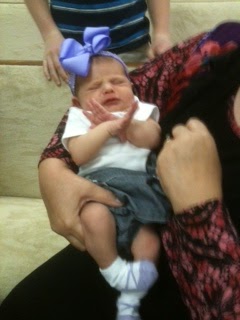 And that's why I've been absent from blogland. I think she's a good enough reason, don't you?