Gobbling Up the Hodgepodge

I know, totally lame title, right? Sometimes you hit it and sometimes you don't. In the meantime, do you want to complain about cheesy titles or do you want to enjoy the Hodgepodge and then get on with Thanksgiving? I thought so. In that case, read and comment (with or without thankfulness, your choice) and then head on over to Joyce's to see what everyone else fancies in a turkey.

1. Turkey-love it or leave it? White meat or dark? What's your favorite thing to make using leftover turkey?
I like turkey on the table, but I'm not too fond of turkeys at the table, especially the human kind. My favorite thing to make when we have leftover turkey is reservations 'cause with all our boys, we don't have much in the way of leftovers.

2. Gotta burn off all those carbs the day after a holiday feast so which would you rather do-run a 10K or climb a mountain?
Considering the crowds on Black Friday, it seems that shopping could be just as strenuous and work off just as many calories.

I'm not going to go shopping on Friday, but I'm not doing a 10K run or climbing a mountain either.

3. Do you feel like social networking has made your relationships better or worse? Explain.
Considering I would not have a relationship with a lot of you wonderful fellow-bloggers, I'm gonna say better. Except where it made it worse. (Get real. Do you expect me to do my best answers when I still have pies and stuffing to make?)

4. How do you find and express gratitude for the hard things in your life?
Mostly by whining and complaining until I realize the person I'm talking to has it much worse than I do. Then I feel both grateful and guilty.

5. In the US, the day after Thanksgiving has been dubbed 'Black Friday'. Is most of your holiday shopping done live and in person, or is it done more through the magic of the Internet? How do you feel about stores opening at midnight Thanksgiving night? Will you be out amongst the masses on Friday?
My shopping is done wherever I find the deals and whenever I have to money. Suffice it to say, I haven't done any shopping yet.

As far as stores opening on Thanksgiving (some are opening at 8:00 p.m. that night) I'm against it, but I saw it coming. If a day about giving thanks can't be ruined by sports and gluttony, might as well get rid of it completely, right?

6. Speaking of the color black-which black item in your wardrobe would you say is your favorite?
I have a lot of black in my closet. It makes a good canvas for great colored scarves and jewelry.
(Oh come on, I really have it 'cause it's slimming. Are you saying you don't wear black for that reason? Yeah, right.)

7. What do you appreciate about your life today?
That you all keep coming back and reading even when I get snarky.

8. Insert your own random thought here.
Right now I feel absolutely no pressure about getting things done for the Holiday season. It could be 'cause I'm really organized and ... sorry, I couldn't help but laugh. I have no idea why I feel no pressure, but I'm enjoying the sensation while it lasts. 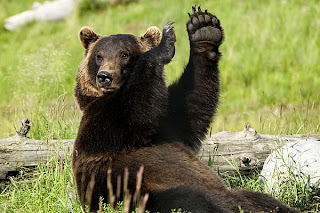 Not only are we in a suburb, but we're in a subdivision. A genuine, bonafide subdivision with a name and HOA nazis and everything. Seriously. We get "gentle" reminder letters if we leave our garbage cans at the curb for too long or if we have weeds growing in our cracks. (Cracks in the driveway, people! Even the Homeowner Nazis don't look that closely so get your mind out of the gutter.)

I must admit, I'm beginning to see the sense in removing your garbage cans from the curb as soon as they're empty. Or even removing them from the property completely. It seems that garbage cans are the real life pik-a-nik baskets for roaming Yogi-wannabes.

Even at that I wasn't too worried. That conservation land is less than a mile wide, and there's a bar and a highway on the other side of it. Didn't seem like a place where wildlife would really like to hang out. Except a couple of weeks ago I was headed back on a Sunday night from dropping our son back off at college. It was late, and I was chatting on the phone with my husband. He had just gotten home from church and was complaining that some sort of critter had gotten into our garbage, even hauling some of it off to the edge of the woods. He speculated that it was a bear because entire bags had been dragged across the small clearing and ripped apart at the edge of the trees.

Suddenly I heard my husband gasp over the phone and then say, "It is a bear! It is a bear; I just saw it come out of the woods. I'll have to call you back." Common sense would indicate that he was hanging up because he had to call the authorities.

Common sense would be wrong.

I waited an hour for someone to call me back and reassure me that the bear hadn't eaten my entire family. I was not thrilled to find out that Indiana and our grown son, Matt, had chased the bear back into the woods.

Chasing bears does not seem very prudent to me.

A week or so later I reminded the boys to set out the garbage for pick up in the morning. A short time later I came downstairs to find the garbage ignored and all of the boys joining their dad for a movie in the family room. When I reminded them about the garbage, I was informed that they were waiting for the bear to go away before they went outside.

I suggested (more than once) that we should store the garbage cans in the garage to keep from being the neighborhood drive-through for wildlife. I've been soundly ignored. (More than once.)

Tuesday night my husband was on the phone with Luke, our son at college. On nice nights Indiana likes to pace up and down the driveway while he chats. Don't ask me why. At any rate, he opened the front door the front door, mind you, and came almost face to face with the bear. I guess if we're not going to put out our garbage early enough, Yogi is now feeling free to come knock on the door and remind us of our duty to share our garbage bounty with those less fortunate.

The bear was literally on the sidewalk, between our driveway-parked vehicles and the house. Startled by Indiana's sudden appearance, the bear hurried over to the (small) clearing at the side of our house. I guess he realized we wouldn't chase him any farther because he turned around and sat down not ten feet from the house. He looked like a giant dog. (We tried taking pictures by the way, but when you take a picture of a black bear at night, there's really not a whole lot to see.) After a few moments of sitting at attention, Yogi sprawled lazily in the yard and watched the cars drive by.

He also watched all of my men-folk who were congregated in our driveway. I couldn't convince any of them that standing there with nothing between them and the bear was not the smartest move I've ever seen them make. Being the only one with some common sense, I went inside to cower and watch the bear through the family room window.

After about ten minutes, I was relieved to see the bear get up and waddle away from us down the sidewalk. I was not so relieved a moment later when Indiana moved into view. He was less than 10 feet behind the bear, and was following (re: chasing) the bear away from the house. At that point I couldn't stand to watch any longer so I did the only thing that made sense. I closed the blinds and re-confirmed the amount of life insurance I'd be receiving.

The bear eventually left. Someone called the police, but by the time they got there, Yogi was long gone. One neighbor called animal control, but they said they couldn't do anything because there hadn't been an "incident". That left me wondering how much blood had to be shed for it to be considered an incident.

Stephanie named the bear Yogi because she said we couldn't have a normal bear visit us; we had to have a grandstanding one.

I'm just worried that Yogi is auditioning one of the boys to play BooBoo.

I know the title sounds like a class course. But after 100 Hodgepodges under our belts (and that's the only reason for the bulge around the middle!) we're going back to the basics. Well, the Hodgepodgers might not, but I am. The basics, of course, would be what we do every Wednesday. Read and laugh. Then comment, click, repeat. Very simple and you'll get an A+ for effort!

1.  What rule of life should never be broken?
Breathe. If you ignore this basic rule, life tends to be rather short.

2.  What's your favorite family recipe?
Ice. I'm a master at making it, and it's always requested at our church fellowships.

3.  Is the media manipulative?
Is the sky blue? Is the White House white? Are boys going to make a mess? Am I going to be sarcastic?

4. Hubs and I saw Skyfall last weekend...are you a fan of the Bond films? If so, who's your favorite Bond?
I've never actually watched all of a Bond film. I'm more of an Indiana Jones girl, what with being married to him and all.

6.  What's a nearby tourist attraction you'd like to see, but haven't gotten around to visiting?
Disney World. We can't afford to take the whole family. But since our family is one tent short of a circus anyway, I don't think we're missing out on much.

7.  Where's your favorite tree?
The one in the garage. It's in a box labeled Christmas.

8.  Insert your own random thought here.

Life with Indiana Jones has its own set of rules and hair-raising adventures. Come back tomorrow and I'll tell you about the bear that has adopted us.
Yeah. I said bear.