Reckoning with the Hodgepodge

The Hodgepodge is always a force to be reckoned with! So join up. What are you waiting for?

1.  Are you a force to be reckoned with? In what way?Ask my boys whenever they're getting into trouble. 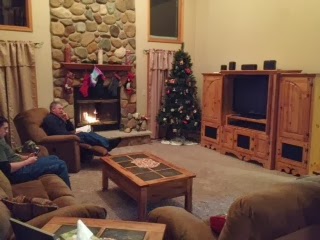 And I like that I can wear boots and scarves all the time. I'm sure that will get old, but since I only got to wear them once or twice a year in Florida, I'm enjoying it for now. We no longer have our Christmas tree up, by the way, but this is the only picture I have of our fireplace.
3. Pomegranate, kumquat, persimmon, kiwi, and guava are all fruits said to have health benefits, particularly during the winter months. Do you have a favorite on the list? Are there any on the list you haven't tried? I believe I've mentioned before that I like kumquat because I like saying kumquat. I've never actually tasted one; I just like the word. I also like rutabaga.


Rutabaga is not a fruit, by the way, but since I was talking about food words that I liked, I mentioned it.

And now my boys have ruined the word kumquat for me because they're calling it "kumsquat" which is not nearly as pleasant to say. Or picture.


5. Do you ski? According to one list I've seen, the top 5 ski destinations for 2014 are-St. Anton Austria, Whistler Canada, Cortina Italy, Tahoe USA, and Zermatt Switzerland.  Of the five listed, which would you most like to visit? We can make skiing optional if that helps the non-skiers with their answer. If those are the top destinations they'd probably be more crowded than I'd care for, and since I've never done any skiing, and since I would feel obligated to ski if I traveled to a ski destination, I would not care to ski down a hill on my face in front of that many people, so I'm not going.

6.  What's the last thing you looked for online? (Besides my blog!)My blog.

7. What saying, slogan, quote, or motto have you seen lately that inspires you for the new year?

A word to the wise ain't necessary - it's the stupid ones that need the advice. --Bill Cosby

I'm not sure it inspired me, but it made me smile and nod.

The One Where We Moved 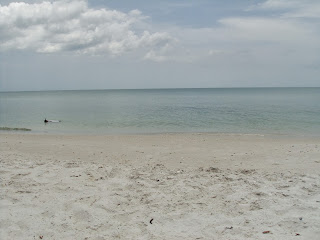 So how did we move from the land of sunshine to cold and snowy Michigan? I'm glad you asked. Everyone here in Michigan is asking. Usually with that tone reserved for people that aren't very bright.

After all, who moves up north at the very beginning of winter? Actually, people who moved to Florida in June, probably. And that's how we qualify.

For sometime we sensed that God was almost through with what He wanted us to accomplish in Florida. But knowing you're moving and knowing where you're moving are two different things. Normally, when you are looking for a new job, you send out a whole slew of resumes, but my husband didn't feel comfortable doing that. As a pastor, he said that when God wanted to move him, He knew where we were and He would let us know where to go. He'd been asked to fill in a few times at different places when they needed a speaker on Sunday, but nothing that we really thought God wanted us to move to.

Then one day I heard about a church in Michigan that needed a pastor. Terry's from Michigan, but he doesn't have the best of memories growing up there and had no desire to move back. I didn't want to move either. Although I'm also from the Midwest, we've lived in the south for almost twenty years, and I considered myself a transplanted southerner.

The interesting thing about this church was that they were one of our supporting churches when we were missionaries in Uganda. Still wasn't interested, so I decided not to tell Terry about this church. However, I didn't want to be responsible for turning down something that was God's will for us either, so I asked God to let me know if He wanted me to tell Terry about the church. (Aren't I spiritual?)

Apparently God didn't trust me to pass on the message because He got it to Terry through someone else. Terry mentioned to me that this church was looking for a pastor. "Just because a church is looking for a pastor doesn't mean you're supposed to be the one they call," was my observation. He agreed and said he really didn't want to move to Michigan.

A couple of days later, he told me to send a resume. He had called the church, and the head of the pulpit committee was the guy we had stayed with when we were there for a missions conference fifteen years ago. He remembered us, and was excited to hear from us. "Just because we visit doesn't mean they'll call me as pastor," Terry told me. "And even if they vote for me, I don't have to accept it."

We went up there in September and stayed in their little old-fashioned mission house. One chair leg kept falling off every time we sat in it, and the other chair had a broken back that made you sit way forward. The church was a hodgepodge of add-ons with contrasting architectural styles, so you knew which decade each part of the building had been added.

The building may have been odd, but the people were really nice. We had dinner with the pulpit committee and their wives the first night there, with a question and answer time. Terry preached Sunday morning and Sunday night, we sang a duet in both services, and they had a fellowship afterward. We kept reassuring each other privately that it was just a weekend, and we weren't likely to be back, although after we got back to the mission house Sunday night, I told him he had preached himself right into a return visit, thank you very much.

And then they dropped us off at the airport and that was it. We heard from the references Terry had listed that they were checking on him, but nothing came of it for almost a month. Then they asked him to come back. They wanted him to preach both Sunday services again, and they would vote on whether or not to call him as their pastor after the evening service.

We kept asking each other if we were really going to do this, but it was clear to both of us where God was leading.

And that's why we're okay with moving to Michigan at the beginning of winter. 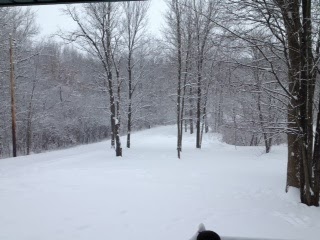 Here's the view from our front porch. You know, the boys prayed for snow every winter while we lived in Florida. I just wish God wasn't answering all those prayers in our first winter here.

The Hodgepodge of the Queen's English

You know you've been waiting all week for this! Join in!

1. Every January 1st since 1976 Lake Superior University has published a list of words they'd like to see banished from the Queen's English.  Words may be banished due to misuse, overuse or just general uselessness (go here to read more about how the words were chosen).  Here are the words/phrases they'd like to see banished in 2014:
selfie, twerk/twerking, hashtag, Twittersphere, Mr. Mom, T-bone, ____on steroids, the suffixes-ageddon, and -pocalypse added to anything and everything, from the world of politics the words-intellectually/morally bankrupt and Obamacare, and from the world of sports the words-adversity and fan base

Which of these words/phrases would you most like to see banished from everyday speech and why? Is there a word not on the list you'd like to add?
I'm fine with banishing the words, but could we also banish the actual existence of these things? I think the whole world would be better off.

And by the way, if you banish adversity and your fan base from the world of sports, is it really a sport anymore?


2. What one unfinished project nags at you begging to be completed in this new year?
Unpacking and settling into our new house. I would like that completed this month, not this year. In fact, this week would be good.
And since I cleaned out a whole bunch of stuff before we moved, where did all this junk come from that I'm unpacking now?!?

3. When did you last have a bowl of soup? What kind? Homemade or from a can? What's your favorite soup?
Now that we actually live in a state that has winter ... and cold ... and snow, we've enjoyed a lot of soup in the last two months. We like both homemade and canned, especially if it comes with grilled cheese.

4. Snowed in, snowed under, snow job...which one most applies to your life in recent days, figuratively speaking.
Maybe a little snowed under. After all, we moved into our house five days before Christmas. We still put up the stockings and the tree, but we had to be a little creative with the picture taking to avoid all the boxes stacked everywhere.

6.  In general, would you say you're clumsy?
Yes, and so would anyone else that knows me.

7. Elvis Presley was born on Hodgepodge Day (January 8th) back in 1935.  Are you an Elvis fan?  What's your favorite Elvis tune? If that's too hard, which Elvis tune do you dislike the least?  Click here for a list of his songs.
Elvis has left the building. Let the poor man rest in peace.

8. Insert your own random thought here.
I made a big announcement on the first that I was back to blogging. Then I didn't post anything for a week. That's not the kind of blogging I was planning on getting back to, but internet issues and something else ... oh yes, THE STORM kept me from blogging. But all is as back to normal as it can get, so you'll be hearing from me more often.

Yes, after a four month hiatus I'm back to blogging. A lot's happened in the past four months, which is part of the reason I haven't blogged, but if I were to tell you about it all now, you'd be reading this post for the next four months.

So instead, we'll just go with the news that we've relocated from Florida to the great Midwest where I've enjoyed more snow than I've seen in twenty plus years. We're still unpacking and I'm afraid I'll never find enough socks to keep my feet from freezing. I'm also resigned to the fact that I won't truly be warm until spring.

Be that as it may, we're right where God wants us and that makes everything else all right. I'll be blogging more about all the changes in our lives over the next few weeks. For now I'll just say have a Happy New Year.