In the last group of Hodgepodge questions, I commented that "dittle" was my word for the day. Several people asked questions about the word in the comments, so I'm answering them here.

My daughter-in-law accidentally coined the word dittle when she meant to say ditto, and it came out wrong. Then she said that was her new word. It's an all-purpose word that can be used in any part if speech. It makes a great exclamation word:

"We went Christmas shopping today."
"Dittle! What'd you get me?"

It can also be used as a noun:

It's not technically a substitution for profanity, but feel free to use it that way if you must.

It can also be used as a verb:

"I really dittled my finger."

That last sentence was because of a mishap in the kitchen last week. My family, used to gourmet cooking as they are, requested hotdogs and canned chili for dinner one night. Being extremely competent with a can opener, I opened up the can of chili, bent the lid back out of the way and scrapped the contents into a pot.

Apparently that particular can was possessed because the lid suddenly developed a mind of its own. It bent forward and took a bite (a deep bite) out of my finger. 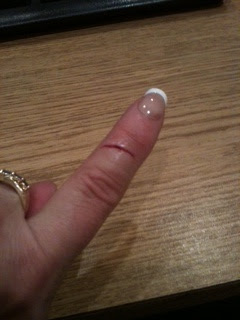 I don't usually have pictures, but I went all out for you here. Aren't you proud of me?
It's deeper and more painful than it looks. It's also my index finger (one of the most important, I would think) and it's on my left hand. I'm left-handed.
My family was relieved to know that I didn't get any blood in the chili.
I did get blood everywhere else. I knew it needed stitches, but I wasn't about to spend the next four hours sitting in an emergency room. No bandaid was up to the job, so we bandaged it with multiple paper towels folded down to size and taped around my finger.
I soaked through two of those makeshift bandages that evening. I finally stopped bleeding by morning, but anytime I bent my finger, the waterfall of gushing blood began again. That made it difficult to shower and dress for work, but I managed. I was quite proud of my ability to cope until it came time to put gel in my hair. Pressing the dispenser on the bottle started the bleeding up again. Since I didn't want streaks of blood in my hair, I was stuck.
This is where Indiana came to the rescue. I debated all other options, but finally I asked him if he would help me. I pumped gel into his hands, and he immediately assumed an expression of high-end stylist snobbery as he lightly worked his fingers through my hair.
His technique was so good it disturbed me.
Although he was a good sport about helping with my hair and even putting my earrings in, I knew better than to press my luck. By the next day I'd perfected my own finger-less strategies and was able to do without an assistant.
A doctor friend took a look at my finger and agreed that yes, I should have had stitches, and no, it didn't look infected in spite of the swelling. She did point out that if I continued to bend my finger the wound would continue to break open. She suggested either using a splint or taping two fingers together so that it would stay straight and heal.
She did not tell me how to type or play the piano while in a splint. This could get interesting.
So there you have it. I dittled my finger and am going about my normal life, plus all my Christmas-related duties, with diminished capacity. My poor, swollen digit sticks straight up most of the time in a vain attempt to heal.
I guess I should be glad it's not my middle finger. Then I probably wouldn't need a dittle to express my opinion.

For whatever reason, my computer does not like the Hodgepodge button today. So I don't have the picture, but you can still click here and see Joyce and her weekly Hodgepodge questions. And since you're there anyway, why not answer them? You know if you had something better to do you wouldn't be wandering around the internet anyway. That's why I'm here, after all.

1. Will you be hosting any house guests between now and the end of December? Does that thought make you happy or crazy? Do you do anything special for your guests to make them feel at home? How long should a house guest stay?
We have long hosted multiple Christmas parties at our house. This year, for a variety of reasons that I won't go into, our house was not a good idea for any parties. My husband agreed with me and promised me that we wouldn't have to host our Sunday School Christmas party at our house this year.

To answer the second part of the question, a guest should leave just a couple of minutes before the host thinks they should leave.

2. Walter Elias Disney was born this week (December 5) back in 1905 ...what's your all time favorite Disney movie? Here's a list in case you're struggling...and yes, you have to pick one.
I know there are tons, and I like many of them, but when I think of Disney, I think of the classic cartoons. And my favorite is Cinderella. Come on, the dress ... the shoes ... the prince ... the horse-drawn carriage (pumpkin) ... what's not to love?


3. What was the last thing you purchased that you realized was a mistake after the fact?
Pick a craft book. Any craft book. I know I can't do them. I know I'll never tackle most ideas in the book, let alone actually complete them. And the ones that are completed I would never show anyone. Yet still, occasionally, I can't help myself. I call it my Compulsion To Be Martha Stewart syndrome. It's under control at the moment, but the medication has some interesting side effects.


5. Amaryllis-snowdrop-poinsettia...your favorite winter blossom?
Poinsettias say Christmas. Well, not really. At least, they shouldn't. My flowers don't talk to me. Mostly because I refuse to water them and bring them to the brink of death repeatedly before shoving them over the precipice. But still, the fake ones look like Christmas.


6. What is one thing on your personal Christmas wish list? I think we all want peace on earth so let's make this answer an actual item.
An ipad, of course. And a clean house. But I doubt I'm getting either of them.


7. If you could only use one word today what would it be?
Dittle. My daughter-in-law came up with that word the other day and now she uses it in almost every situation. It makes us laugh.


8. Insert your own random thought here.
I was stunned when one of my children said recently that they knew I always asked for a clean house because we didn't have any money for anything else. Seriously? They thought that was the reason?