Pie to the Power of Pumpkin 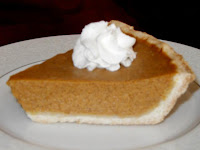 There's something very wrong about referring to a Thanksgiving dessert in math terms, but since I've spent so much time lately helping one child with algebra II and another child with pre-algebra, and a third child with algebra I ... well, you can see why I've started speaking math phrases.
Thankfully, though, (did you like that segue there?), this post is not about math. It's about pie. We're not really pie people in our family. Probably because I'm not much of a pie chef. If I'm going to bake, I'd rather be doing cookies or cakes.
There is one time of year, however, when pies are an absolute necessity. And that would be at Thanksgiving. We always have pumpkin pie and chocolate pie as part of our Thanksgiving Day dessert. I usually also make some third choice because having the same thing every year can get monotonous. (This year my daughter-in-law is bringing that third choice. Yea!) Even when I branch out, though, I get complaints if the requisite pumpkin and chocolate pie choices aren't part of the equation.
Sorry. Slipped a little math back in.
At any rate, I'm not all about the pie crust. I've made them from scratch before--I've made pretty good crusts from scratch, if I do say so myself. But when I eat pie, I'm not admiring the flaky crust. I want the filling. And the whipped topping. That's the reason for pie as far as I'm concerned. I've done enough "from scratch" that I don't feel the need to prove my abilities every year. So most years I go with a ready-made pie crust.
I've also made the pie fillings from scratch. In fact, one year I actually cut up and canned a pumpkin, and then used that to make my pumpkin pie. I mean, you can't get anymore homemade than that! But since the kitchen is not my favorite room in the house, most years I settle for Libby's canned pumpkin pie filling. My family likes it too, so why mess with what works? 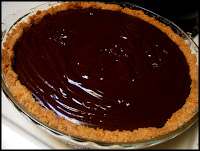 As for chocolate, jello pie/pudding mix works for me. And my family actually prefers the taste to a homemade chocolate pie. (maybe they just prefer the taste to my homemade chocolate pie, but that's another blog post.) The important thing is, I'm pleasing my family and getting off easy at the same time.
It just makes no sense to me to spend all that time on homemade efforts that aren't worth the trouble, at least as far as my family's tastebuds are concerned. I've got to spend all my effort on the stuffing and mashed potatoes (both from scratch, thank you very much). Plus the dozen other sides that go with a traditional Boyd Thanksgiving Dinner.
Now Christmas dessert? That's a whole 'nother story. We're probably having Cheesecake Factory cheesecake.
Hey, we don't mess with tradition.

P.S. What about you? Does the dessert make the meal, and will the family forgive you if you don't slave over every aspect of it yourself?
Posted by Jill at 11:01 AM