Husband of the Year 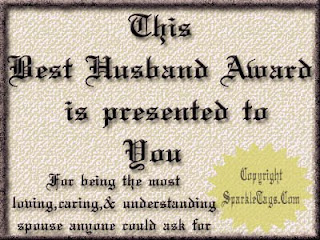 Just gotta brag on the hubby today. I dragged myself out of bed this morning, not remembering what day it was or why the alarm was on. I usually get that way by the fourth day of Super Conference. We've only had two days so far--this is not a good sign! But I had to get up early because we have company coming to the house this afternoon. Our house looks exactly like you'd expect it to when everyone was sick for two weeks. Neglected is probably the nicest thing I can think of to say about it. So I staggered out of bed and woke the boys up. (I didn't make the mess by myself; I'm not cleaning it up by myself!)
Terry followed me into the hall and asked what I was doing up so early.
"Time to clean the house." I muttered, knowing I sounded like the Dunkin Donuts guy.
"Go back to bed for another hour," he suggested.
I told him I'd love to, but the house had to be clean and I wouldn't have time after I got home from work to take care of everything.
"I'll get the work started and the boys will help me. You go back to bed and sleep for another hour."
Terry gave me a kiss and headed down the stairs. I staggered back to the bedroom and slept deeply for another hour. I felt much better when I woke up, and when I went downstairs, the boys were working like little fiends. The house already looked better than it had.
Terry's had about as much sleep as I have the past couple of nights. Isn't he the sweetest thing?

For an update on the conference, last night was totally awesome. Bro. Riggs spoke on having good judgement. He used the story of Joseph and Potiphar's wife in Genesis. He pointed out from the text that, when Joseph was tempted, first he looked around and saw how much he'd been blessed. Then he looked within himself and saw that he wasn't the kind of person to do something like that. Then he looked to the future and saw that no good could come from giving into this sin. Then he looked upward and saw how his actions would appear to God. Great challenge on using wisdom and discernment!

The second speaker was Bro. Mike Allison. Anyone whose heard him knows that the message had to be great. He preached on the decline of the church in Jerusalem in the book of Acts. He pointed out that they had over 10,000 saved in the matter of a few weeks. Then people began selling their belongings to help take care of each other. Then they had problems with hypocrites (Annanias and Sapphira) and then no one was giving anymore. Then in the next chapter they had complainers. Then they went to criticizing others that were doing something for the Lord. And finally, several chapters later, they came to the point where they had to dispute what really saved a person because they no longer knew the truth. It was a very challenging and eye-opening message. No matter how close you are to the Lord, there's always room to fall if you don't keep serving Him as you should. Both messages were so challenging! I can't wait to hear what God's got in store for us tonight!
Posted by Jill at 1:07 PM