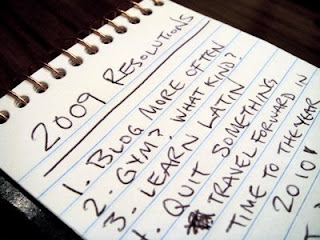 You've got fifteen hours left. That's plenty of time. Get out a piece of paper and start writing something. Anything. How can you not go into the new year without some resolutions? Certain items in your life where you have resolved to do better?

Last night at church I was amazed at the number of people who said they don't make resolutions. When asked why, they said it was too hard to keep them. Most of the people did however have goals for 2010. I'm not sure I see the difference, but whatever. I've been doing some thinking on this subject, and I have some practical suggestions on how to have success at keeping your resolutions. Or goals. Or whatever you want to call them.

Let's take a look at a standard list of resolutions, shall we? What's usually on there? Probably something about losing weight. Perhaps something about taking on a new challenge (learning a language, starting a hobby), maybe some improvement plans (be a better mother, daughter, housewife, etc.). How often have we made these resolutions and then found at December 31st that, if we even remember where we put our list, we haven't fulfilled anything? Why are we a bunch of losers?

The problem isn't you. The problem is the resolutions. They're vague, they're ambiguous. It's harder to hit a target if it's fuzzy and out of focus. So how do we make resolutions that we can honestly keep?

Secondly, you need measurable goals. If you decide you want to get fit, spell out in your resolution how often you're going to be exercising. If you're going to have a cleaner house, you might factor out chores for each day in order to stay on top of things. Give yourself a way to measure your success.

Thirdly, you need achievable goals. If you set impossible standards for yourself, you're setting yourself up for failure. If you spent 2009 as a couch potato, don't make it a resolution that you're going to exercise an hour a day seven days a week in 2010. Instead, perhaps you set that you will engage in some sort of physical activity (beyond reaching for the remote) for ten minutes every day. Or you could decide that twenty minutes a day, three times a week will fit into your schedule. Give yourself something you can actually achieve.

Fourth, (or maybe this should be first) commit yourself to keeping your goals. That's the difference between a list of goals and a list of wishes. Determine right now, before the new year starts, that you will keep the goals you make for yourself. Don't let anything stop you.

Fifth, do a little checkup at the end of January. How're you doing on those resolutions? Were you a little too ambitious? Or so easy on yourself that you're already bored? Did you get waylaid by a big trip and then the 10 days with the flu? This checkup will enable you to get back on track, or adjust your goals as you see how they work.

Always keep track of your progress, and then have a little mini new year on July 1st. You're halfway through the year. Have any resolutions fallen off the grid? Do any need to be expanded? For instance, if you've been faithful in 10 minutes a day of physical activity for six months, it might be time to kick it up a notch.

I hope these ideas help you have a more successful 2010, resolution-wise. And I hope all of you have a very Happy New Year.

NOTE: Due to a wedding and some traveling in the next couple of weeks, I may be in and out of blogworld, but I won't leave you hanging. I'll do some reposts on those days. Hopefully they'll be few and far between.