I don't think I've mentioned the pet changes we've had around our house lately. First off, we now have a dog. Sonny is a five-year-old shepherd/retriever mix. He's a great dog and well trained, but his owners were both with FEMA. They were constantly traveling, and they finally decided they'd rather give him to a good home instead of having to board him all the time. A friend of a friend found out about him and told us. Matt's wanted a dog for a long time and so that very same day he and Terry went and picked up Sonny. He's great as a guard dog--barks his head off if someone is anywhere near our yard, or if someone comes to the door. He scares the pizza guy to death. The boys love playing with him. It's great because he's young enough to want to play, but he's old enough to have lost that frantic puppy energy. Plus, he was already house trained. 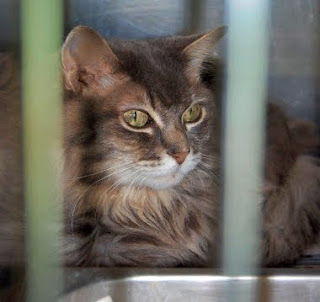 On the goodbye side, we've lost one of our cats. Snickers and Skittles were gray tabbies that we've had for over six years now. They were from the same litter and they looked a lot alike except that Skittles had short hair and Snickers had long hair. And both were very big. Skittles is the more outgoing one. She would show up when we had company, and she usually sleeps in the boys' room. Snickers was the shy one, and she was more my cat. She spent most of her time either under or on our bed. The day after I got home from Denver, I noticed that she was lying in the floor in front of our bathroom door--not her usual place. I thought it was odd, but I figured it must be a warm spot that she had found. Later on the boys commented that she was still there and they thought she was sick. When I walked up to her, she flicked her tail back and forth and purred a little, but didn't move from her spot. I brought her food and water, but she wouldn't touch them. Her breathing got more and more labored and then eventually she was gone. I cried some as I said goodbye, but I'm glad she didn't go while I was out of town. She was a good cat, and I miss her.

Poor Skittles walked around for a day or two, meowing. I think she misses her sister. I'd like to get a kitten sometime, but I'm not sure how Skittles or Sonny would react to that, so I'm biding my time. There's something very therapeutic about petting a cat. Once in a while I'll find myself glancing around for Snickers before I remember she's gone. Thanks, Snickers. You were a great cat.
Posted by Jill at 5:31 AM

Email ThisBlogThis!Share to TwitterShare to FacebookShare to Pinterest
Labels: pets