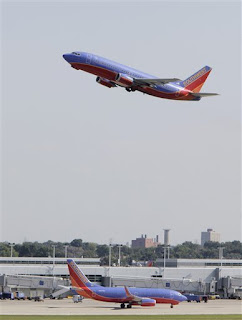 I am not a big fan of flying. In fact, I've been known to drive twelve hours in order to avoid having to fly. But of course, if you think about my life, driving twelve hours makes sense. Twelve hours in a vehicle by myself, with peace and quiet. Stop when and where I want to stop, listen to things I want to listen to ... turn off my cell phone, and it's definitely got its merits.

But even though I prefer driving, sometimes even I can't justify the distance. And the almost 2000 mile trip to Denver last week was one of those times. So I swallowed my nerves and booked a flight on Southwest. I discovered a few things about flying last week and I thought I'd share them with you.

1. Southwest doesn't assign seating. You just pick a seat when you board the plane. (Obviously you are supposed to pick an empty one.) So how do they decide who gets to pick first? You're supposed to call within twenty-four hours of your flight, and they assign you a boarding number. If you were assigned "A-43", then you line up when they call everyone A31-60. They take your tickets one-by-one and shuffle you onto the plane to choose a seat. My problem was I forgot to call. So I got assigned a boarding pass once I checked in at the gate. Consequently I was one of the last ones to board the plane and the picking was very limited by that time. The good news? I got an aisle seat, which I prefer because I'm claustrophobic. The bad news? It was in the last row of the plane. Right in front of the lavatory.

2. Murphy's Law always applies to me. The plane that boarded before mine had almost half the seats empty. Everyone got to stretch out a little bit. My plane was completely full.

3. Apparently flying upsets a lot of people's stomachs. As I mentioned, I was sitting directly in front of the bathroom. As soon as the "fasten seatbelts" sign clicked off, people started heading past me. As each one exited the lavatory to head back to their seat, the odor got a little bit worse. With no hope of cracking a window, I was relieved when the flight attendants finally used a little air freshener back there. If I'd had a can of Lysol, I would have been shooting a squirt over my shoulder every five minutes or so.

4. The only thing worse than sitting near the bathroom is sitting with the bathroom behind you and a child with a flatulence problem in front of you. The kid gleefully announced every time he expressed himself, but there was no need. We could all tell where it was coming from. I was tempted to ask the flight attendants to spray a little air freshener in his row as well. Either that or order the kid a ginger ale and a package of Rolaids.

5. As if all that wasn't bad enough, in spite of the announcement that there was to be no congregating outside the bathrooms, people did it anyway. They stood two and three deep, crowded into the little doorway that separated the main cabin from the galley/lavatory area. (Just the thought of those two areas being so close to each other made me turn down the snack offerings on the flight.) Being seated next to this standing group of people pretty much placed my head at hip level. Now there's a view you always want of a total stranger! At one point I woke up from dozing and found myself face-to-posterior with a woman I'd never met. I'm considering therapy as I'm sure the nightmares will continue for years.

All this fun and I hadn't even landed in Denver yet! And then there was the flight home ...
Posted by Jill at 12:00 AM