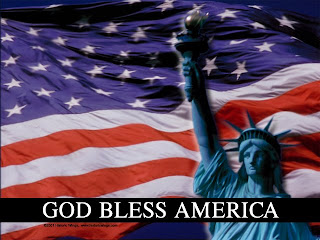 As everyone is gearing up for the holiday weekend, I want to ask you a question. How patriotic are you? What makes a true patriot?
This weekend there will a lot of flag-waving, fireworks and red, white and blue. Patriot songs will be song. Hotdogs will be eaten. Families will get together. That's all great stuff. And it is typical American celebrating. But are we patriots because we do these things?
I think that anyone that serves in the armed forces is a patriot. Fighting for your country is patriotic. Having a deep, abiding love for and pride in your country is patriotic.
All of us can love our country. Not all of us can serve in the armed forces. It's patriotic to help and support our troops. Sending care packages, praying for them, respecting and honoring them--that's patriotic. 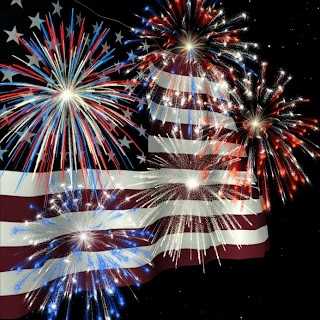 But there are some other ways we can be patriotic as well. These ways may be less obvious, but they are just as important when it comes to being patriotic.
The first is to take part in our government. You don't have to run for office, but you should know who is running. You should know where they stand on the issues. And you should know what the issues are. You should vote every time you have the opportunity. but even that's not enough. You need to follow up with the issues. You need to write and call your Senators and Representatives to make sure they know your views and that they are making good on the promises that got them elected in the first place. This may seem like a daunting task. I would say to you that we get the kind of government we deserve. We don't elect officials to run the government. We elect them to represent us. But how can they if they don't know what we want? What we believe? This has always been our responsibility as citizens, but now it's never been easier to keep up with this. If you have Internet access (and if you're reading this blog, obviously you do) then you can research all the information you need to know. Start with this great resource. The Heritage Foundation is a conservative think tank. Their site is full of all sorts of research and information that informed citizens need.
In addition to being an active, informed citizen, there's another step you need to take as a patriot. You need to know our history. (Shame on you if your eyes glazed over when you read that word!) How can you know where you're going if you don't know where you came from? Those who do not learn from history are doomed to repeat it. This is true in so many ways, and I'll give you one very basic example. World War II happened, in part, because the rest of the world capitulated to Hitler. Hitler made demands and the world caved because they thought if they could just appease him enough, there would not be war. Only too late did they realize that Hitler would never be placated. What's worse, during all the time the world was giving in, Hitler was strengthening himself and his army into a formidable foe. By the time the war was inevitable, the rest of the world had made their enemy, Hitler, much stronger. And much harder to defeat.
How is this similar to today? The radical muslim population of the world is making demands. They are issuing threats. And instead of standing firm and telling them "NO!", the world seeks to appease them. Our leaders seem to believe that if we only give in to what they want (say, Palestine, for example) the radical terrorists will be happy and we can all live in peace. It didn't work with Hitler. But we are dooming ourselves to repeat history.
Not only that, but our President has recently openly declared that we are not a Christian nation. Truthfully, we're not anymore. But we were. This country was built on Biblical principals, no matter how much some people would like to deny that fact. If you want to know more about our beginnings (and you should!) here's another great place to find the truth. David Barton has done an incredible series on our country's beginnings. It's well done, incredibly interesting, and very informative. As an American, and as a patriot, you need to know this information.
In addition to knowing our history, you need to to teach it to your children. Don't rely on the schools (public or private) to do this. Teach them about our roots. Show them why it's important. Don't just tell them. Show them. If there's historical places to visit near you, your children need to see them. When we're gone, our children will have to take up the mantle of being concerned, involved citizens. The time is now to teach them why this is important. 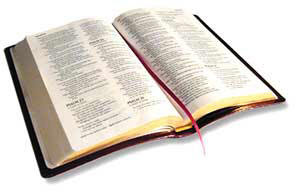 There's one final area that makes a true patriot. If you believe in your country, if you love it and want what's best for it, you'll do your best to reach it. We were founded as a Christian nation, but today Christians, true Bible-believing Christians, are in the minority. Reach out to your fellow Americans and tell them about Jesus. If you're not comfortable sharing the Gospel, you can find some resources to help you. David Wood Ministries has a wonderful soul winning program called Operation Go. Go to their website and click on the church growth link to find their Operation Go program. If everyone who is a born again Christian would lead one American to the Lord, this country would become a Christian nation again in no time.
As you enjoy the fireworks and the family this weekend, purpose in your heart to be a true patriot.
Happy Fourth of July!

P.S. I'm sorry to be a day late posting this. Internet problems!
Posted by Jill at 11:51 AM