A Camping We Will Go 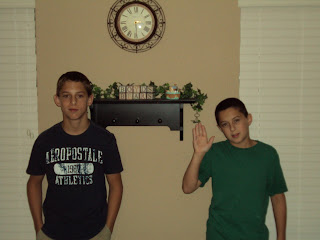 Here are my campers at 3:30 this morning. I took several pictures, but they said I should post this one because they liked it the best. And by now they are almost three hours down the road.
It was fairly easy to get them packed. I told them what kind of things they needed, and then they laid all the items out on their beds. I went through and approved (or disapproved) of their choices, made a list of the things they needed and then took them shopping. When we got home I told them to pack everything that was still on their bed. Job done. I did check on a few key items such as, "Did you pack your toothbrush? Do you have your soap and a towel? Enough underwear?" You know, life's basic necessities.
As easy as it was to get the packing done, it was incredibly hard to get them to go to sleep last night. They had to be reminded several times to take showers, and then even after they were in bed they wouldn't stop talking. I went in for the final good night kiss and prayer together and they still wouldn't stop talking. But they have a long drive today so they can probably sleep most of the way. The drivers would probably be thrilled if all the teens slept through the trip. I don't envy them!
So, easy to pack, hard to get them to sleep and even harder still to let them go. I did a little analysis of myself and my feelings last night (in between tears) and finally realized why this was so hard. (After all, Paul is our fourth child to go to camp. By now I ought to be rejoicing that one more kid can go. And be counting the days until another one is gone for a week!) But in the past year or so, we've learned the hard way what kind of an influence others can have on our children. And since that happened, we've watched them closely. Oh they still mingle and get social interaction, but we're much more aware of who they're with and what is going on. Now here they're going to a big camp with lots of people in it. Some good and some bad, I'm sure. And I won't be there to help steer them in the right direction. I won't be there to protect them from wrong influences. This really bothered me until I realized something else: I won't be there, but God will. And He loves our children even more than we do. In fact, in the past few months He's given me verses over and over again about protecting our children and caring for them. I may worry about them at camp, but I don't worry at all about leaving them in God's hands.
Last night at choir practice we went over a song called "Trust His Word". We only sang it once, but I woke up with it running through my head. And then I realized that I really could trust His Word. He'll take care of my kids.

Email ThisBlogThis!Share to TwitterShare to FacebookShare to Pinterest
Labels: Camp, Growing Up, Kids