My Son, The Alien 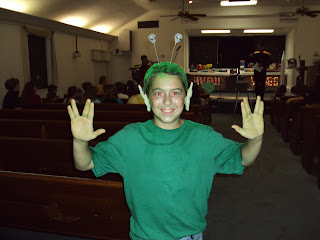 I got the antennae for a dollar each. And the ears were $3.95. An alien for less than five bucks. 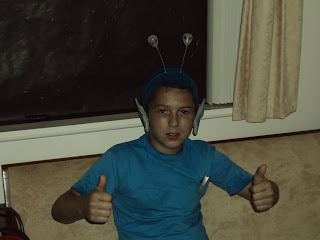 For the body paint, I found a recipe on the internet. Coldcream, cornstarch and food coloring. I mixed it up in the morning and slathered it on him. Not only did he turn colors, but his skin is now very soft and supple! 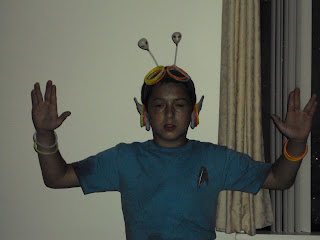 On Wednesday the people in the skit ended up on Saturn. Everyone there wears rings, you know.
Paul had the time of his life. This was the first year he was too old to be a student in VBS, but I think he had just as much (if not more) fun being a helper. And in case you're worried, the body paint washed right off. As did the colored hairspray.

Tomorrow's Post: Happy friends and co-workers. And a little peek at the behind the scenes happenings.
Posted by Jill at 5:00 AM