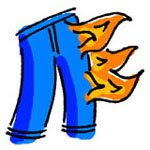 I know when my kids are lying. Can't most mothers tell? There's something in the eyes. I can just see it. In addition to that "something" that I can see, the kids have tells too. They won't look me in the eye. They stumble around in their story. Their story changes. And one of my personal favorites--they are obviously scared to death. They look worried that I won't believe them.
When I catch my kids in a lie, I call them on it. If they were in trouble before the lie, I make sure they know that the lie never makes anything better. It makes it worse. A lot worse. I want to raise my kids to be honest.
But what about when I catch an adult in a lie? You know when it happens. It's right there, staring you in the face. They've said something you know beyond the shadow of a doubt is not true. What happens then?
Most of the time we let it go, don't we? After all, it's not polite to point out when someone is lying. And it might lead to confrontation. That's the way I feel most of the time. At work I'm always dealing with people on the phone, asking for various bits of paperwork and documentation that they're supposed to have. They assure me they're sending it today. It's on the fax as we speak. They're emailing it now. And then I hear nothing from them for a week. Or I'll fax or email something to do them. I can see it went through. But they claim they never got it. Maybe something could get lost in cyberspace once, but every single time?
Still, it's a work relationship. I don't call them a liar. I'll fax or email it again. Usually this time it goes through and they "get" it. You nod, you smile and you make a mental note that person's not trustworthy.
But what about in personal relationships? I've come across this recently, and I've gotta tell you--my brain is screaming, "Liar, liar, pants on fire!" I called an acquaintance recently and talked to her about a situation in which her daughter was involved. A situation that affected me and my family. The woman was shocked and horrified by the situation, but assured me her daughter had nothing to do with it. I gave her proof in the form of a phone call that originated from the daughter. The woman expressed outrage and told me she would get to the bottom of this. A short time later she called back to say her daughter was in tears and knew nothing about it. This woman never got defensive. She was supportive of me and the situation and offered all kinds of sympathy.

More proof surfaced. (I should say here that we weren't even looking for proof. It was just that blatant and obvious.) She denied it vehemently and then tried to offer more sympathy to me, as if we were friends. She assured me that she and her daughter wanted to help in anyway possible to get to the bottom of this.

Finally the situation was too obvious to ignore. My husband confronted the daughter and she defiantly owned up to her actions. Here's the real kicker: she admitted it in front of her mother. And the mother was not shocked. She was not angered or saddened. She was simply accepting of something she already knew.

Sometimes you've got to ignore it, but sometimes actions need to be accounted for. There's nothing we can do about these actions or the lies that accompanied them. But these people at least needed to be confronted. Is it enough that they know we know? I'm not sure. But sometimes you just need to call things as they are. You need to let people know they're not getting away with untruths. It doesn't change the people. It doesn't change us. It doesn't change the situation. But at least it stopped the lying.
We don't interact with these people anymore. There's no need. And it's a fake relationship. Why would we bother? But I still find myself almost hoping I run into them occasionally. I still fight the urge to stick my thumbs in my ears, wiggle my fingers at them and chant, "Liar, liar, pants on fire!"

Tomorrow's post: Grocery store etiquette.
Posted by Jill at 2:00 AM