Well I had hoped to blog during our Vacation Bible School last week so you all could experience the fun as it was happening. Obviously that didn't work out. I had very little time for sleeping, and I didn't even touch my computer last week. (You should see how many emails I had backed up!)
So this week I decided to share a few things with you so you can enjoy our VBS vicariously. Any of you ever been to a VBS at Madison Baptist Church in Madison, Alabama? Then you have an idea of what we did last week. It was phenomenal!
Last year was our first VBS. On our high day we had forty-seven children. With workers we hit seventy-six on the property. On Monday of this year, we had fifty children, eight-six people here total. And every day went up from there. On our Thursday and Friday we tied with sixty-three children each day, and over one hundred people participating in VBS. We also had twenty-seven salvation decisions last week. Praise the Lord! Here's a few pictures to whet your appetite for the posts during the rest of the week. 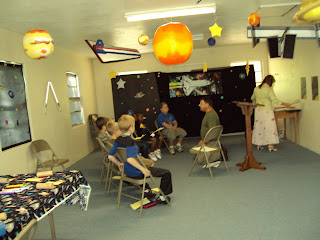 Tim and Pattie taught the 7-8 year old boys. They joined our church after the first of the year and we are so blessed to have them. 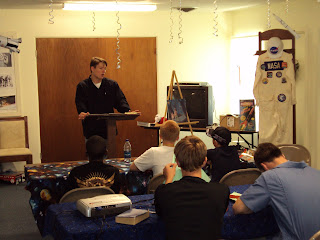 Another Tim taught the boys ages eleven and up. Tim and his wife just joined our church, in spite of the fact that we were pronouncing their last name incorrectly! : ) Tim's class made rockets which they shot off on Friday. 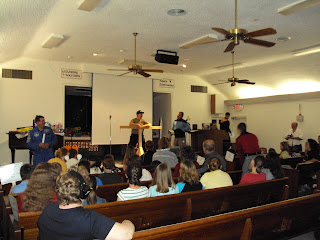 Here we are during Opening Assembly. The scale on the platform is for pennies. We ran a contest all week--girls vs. boys. The grand total we took in this week was $67, which we gave to Bob and Naomi Nichols, missionaries to Brazil. We took in $250 in pennies during our graduation night Friday because parents are just as competitive as kids. Or maybe just a touch more. 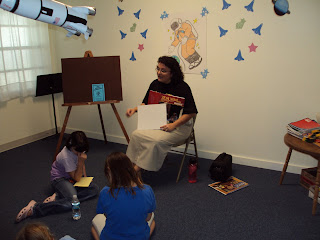 Theresa taught the nine and ten year old girls. She's a school teacher, so she was perfect as a VBS teacher this year. I knew you could do it!

Tomorrow I'll cover some of the costumes from our Outer Space week.
Posted by Jill at 8:13 AM